The forecast band of rain promised good levels on the Macquarie River and Rick Fitzgerald soon had a good sized group of paddlers wanting to follow him down the section from Killongbutta to Bruinbun.  Alas, Bathurst did not get enough rain and the Macquarie did not rise sufficiently.  Rick cancelled the trip on Thursday night but I was still keen to paddle wherever the rain fell.

The Shoalhaven was rising so I asked the group if they wanted to paddle Oallen Ford to the Power Lines.  A few were interested but by Friday morning it had risen too high.  So the trip was moved once again and the Murrumbidgee was the destination.

In the end there was just Ben Jones and Ian and Caroline Houghton who joined me.  The river had risen mid-week but by the time we got on the water at Pine Island on Saturday it had dropped to 1.2m which was just enough to paddle everything.  The water was an unusual dark brown colour but it soon became apparent that was due to runoff from bushfire ravaged areas upstream.  The eddies were full of small pieces of charcoal and the banks were covered with a black mud from where the river have been more than a metre higher earlier in the week.  The murky water made it very hard to see rocks which were just below the surface.

Everything was paddleable except the chicken chute down the left channel of the rapid below Red Rock Chasm which I led Carolyn down only to get jammed.  Ian and Ben shot the main drop.  Ian rolled and Ben made it look easy.  Some of the rapids were a bit bony but it is always an enjoyable section.  The only real incident we had was went getting out to portage the Red Rock Chasm rapid only to step into sucking shin-deep black mud.  A thorough wash in the rock pool along the portage was necessary. 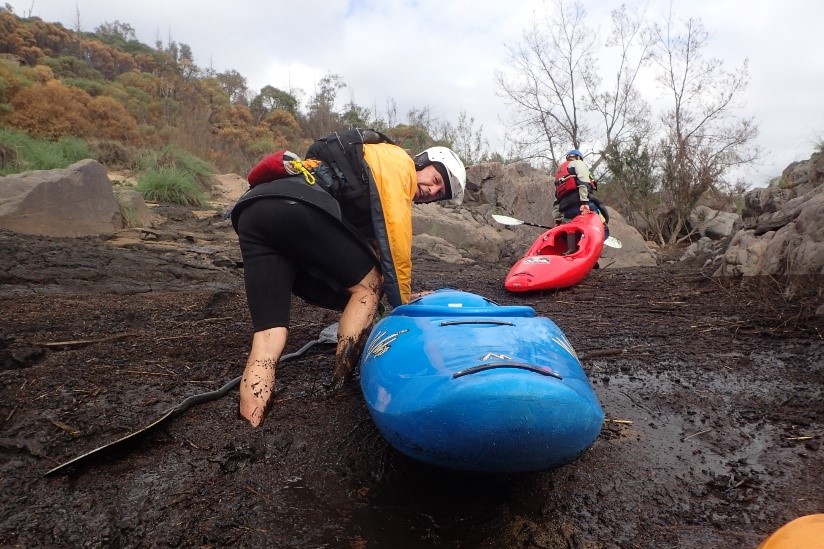 Portaging through the black mud

Ben left us at lunch time at Kambah Pool as he had an appointment that evening in Sydney.  Ian, Carolyn and I paddled on to our camp site at the Cotter Junction.

The next morning saw the three of us heading back to Pine Island for another quick run down to Kambah Pool before driving back to Sydney.  The river had dropped to about 1.1m which meant we had to portage a couple of rapids due to lack of water.  It also meant that some of the lines from the day before now had rocks just below the surface foiling out lines at the last minute.

One such rock suddenly turned Carolyn’s boat at 90 degrees and wedged her into a slot with the main current pushing on her rear deck and a blind 2m drop in a side channel in front of her.  With Ian already down the main drop, I managed to eddy out above and clamber over the rocks to get to her.  From the clamber I could see the drop in front of her was a clean rock slide so I lifted her boat and down she slid. 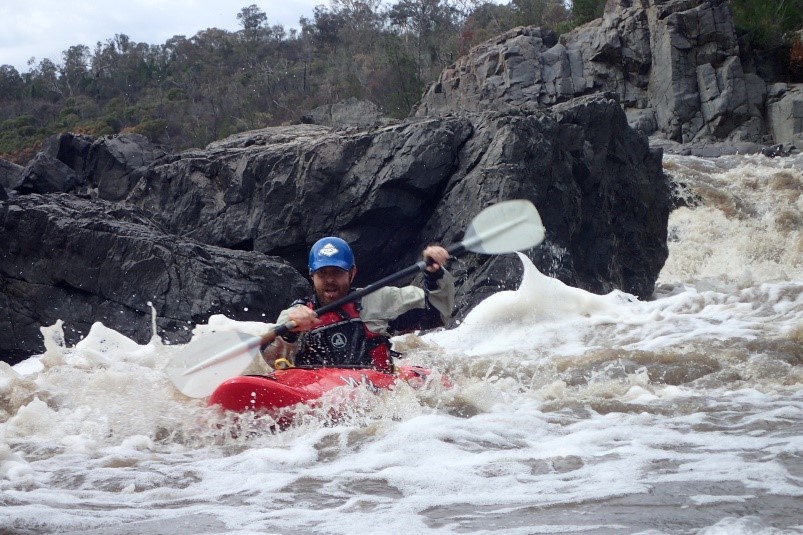 Unfortunately, on the last rapid of note another submerged rock knocked Caroline off line and she went down the main drop upside down before getting wedged across a submerged rock downstream.  Pulling Carolyn safely from the water was easy enough but her boat got sucked back into the hole at the bottom of the drop and it took some work to reunite Caroline with it. 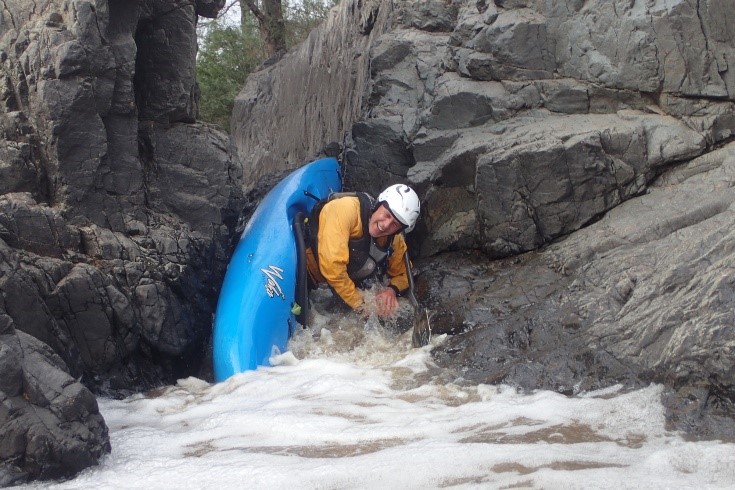 Steven makes the chicken chute look like a mistake

As we paddled the flat stretch to Kambah Pool we discussed the possibility of paddling the Shoalhaven Gorge the following weekend once its level had dropped. 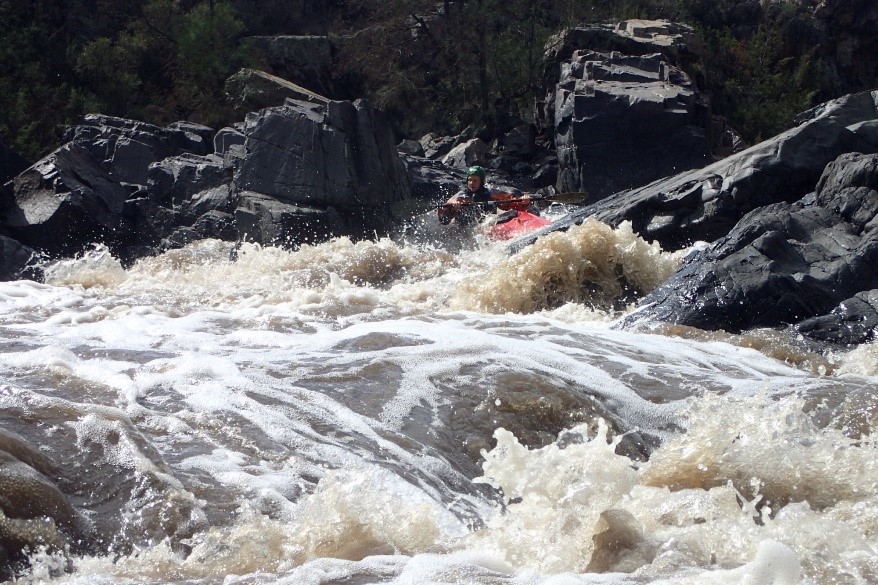